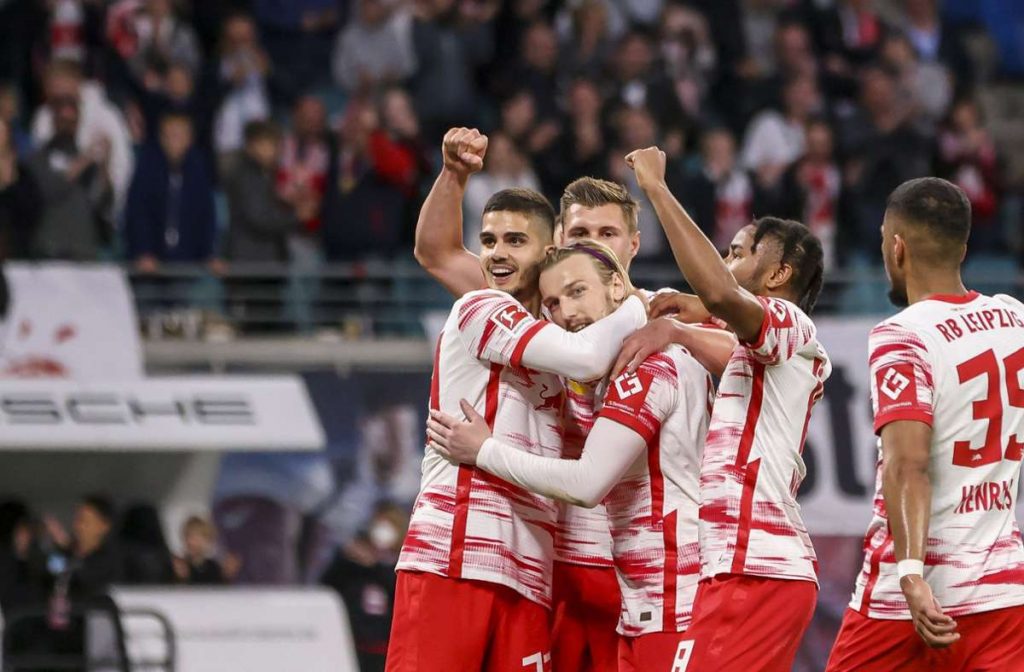 The 2022/23 Bundesliga season is set to resume following a 2-month long interval owing to the FIFA World Cup in Qatar and the subsequent midseason winter-break. With more than half the fixtures still left to play, the campaign restarts with Matchday 16 coming up later this weekend.

Despite suffering an uncharacteristic dip in form earlier on, reigning champions Bayern München was able to retake pole-position and open up a 2-point lead at the top of the standings. Meanwhile Freiburg is enjoying a memorable campaign so far with the club occupying 2nd place in the Bundesliga at the moment. RB Leipzig had a turbulent start to its season which saw the arrival of Marco Rose as its new head-coach and the team has shown sparkling form under its new boss to move up to 3rd spot before the interval.

Europa League holders Eintracht Frankfurt are in contention to book another season in the Champions League with the club currently lying in 4th position. Union Berlin spent quite a few weeks at the summit of the league-table but a sharp drop in form has put it down to 5th spot. On the other hand 5-time champions Borussia Dortmund is having a pretty topsy-turvy campaign as it lies 9 points behind the leaders in 6th position.

At the opposite end, newly-promoted Schalke 04 is languishing in 18th position after an underwhelming start despite making a big splash in the transfer-market. Bochum also had a horrendous start to the season but it has made a remarkable resurgence before the interval which puts it just 1 point from safety despite being stuck in 17th spot. Stuttgart is currently placed in 16th position while 15th placed Hertha Berlin is only separated from the drop-zone on goal-difference. 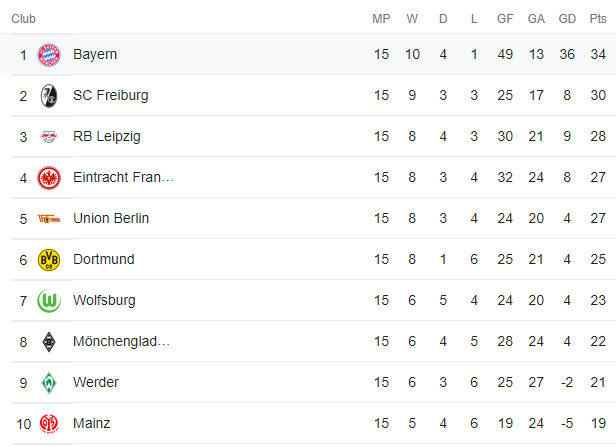 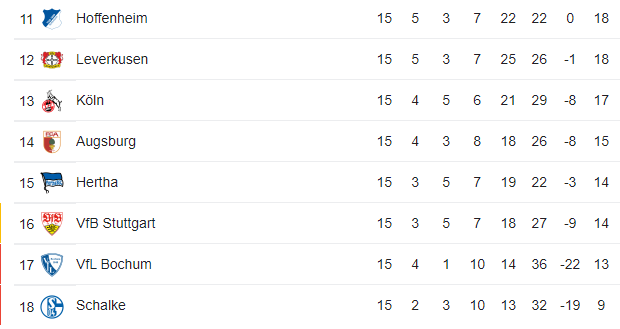 The Bundesliga restarts with a bang as RB Leipzig host Bayern München at the Red Bull Arena on Friday night. Before the break, Leipzig recorded its 4th straight win with a 1-2 victory at Werder Bremen while Bayern won 0-2 at Schalke on Matchday 15.

According to our Bundesliga betting tips experts, the 2.36 offer on a home-win or draw in the Double Chance & Both Teams to Score market looks the best choice here. While Leipzig has a poor record against the champions, it has remained unbeaten at home this season with 6 consecutive victories. So Bayern may have to settle for a draw even though it has scored at least 2 goals in 6 of its 8 away-matches.

The 2.54 line on Eric-Maxim Choupo-Moting in the Anytime Goal Scorer looks an attractive option as well. Choupo-Moting has established himself as the first-choice centre-forward for Bayern. The Cameroon striker has scored 7 goals in his last 7 games for Bayern München in all competitions.

Despite leading the Bundesliga for over a month, Union Berlin has dropped down to 5th position following a 4-1 loss at Freiburg right before the midseason-break.

Hoffenheim also made a good start to its campaign but it is currently lying in 11th spot after going down 1-2 at home to Wolfsburg on Matchday 15.

Favouring the home-team for the Match Result at odds of 2.16 seems to be the best choice on this fixture in the opinion of our Bundesliga betting tips experts. Despite its poor recent form, Union has remained undefeated at home so far with 6 wins from 8 matches. Hoffenheim has shown decent form on the road but it has lost all its 3 away-games against teams in the top-half of the table.

Taking the 2.10 line on Over 1.5 Goals for the home-team also looks a good proposition here. Union Berlin has managed to score at least 2 goals in 7 of its 8 league-matches at Stadion An der Alten Försterei. Hoffenheim has earned just 1 clean-sheet on the road while conceding a total of 8 goals in its 3 away-losses in the Bundesliga.

Half Time/Full Time: Draw/Union Berlin at 5.33 on Sportaza

Union Berlin 2-1 Hoffenheim at 9.00 on Sportaza

After making a slow start, Eintracht Frankfurt has produced consistent form and the 1-1 draw at Mainz on Matchday 15 keeps the club in 4th place for the moment.

Meanwhile Schalke lost 0-2 against Bayern München in its last game before the midseason-break which puts it 5 points from safety in 18th position.

Backing the home-team at the 2.71 price in the Match Result & Both Teams to Score market is the standout pick here for our Bundesliga betting tips experts. Eintracht has picked up 4 wins with just 1 defeat in the last 6 league-matches but it has not kept a clean-sheet in this period. On the other side, Schalke has taken 8 losses in the last 9 fixtures although it should be able to score a goal in this clash.

The 2.28 line on Over 2.5 Goals for the home-team makes another fine bet for this game. Eintracht has managed to score 12 goals in its past 4 home-games in the Bundesliga. At the same time, Schalke 04 has let in 9 goals over the course of its previous 8 league-matches on the road.

Highest Scoring Half: Equal at 3.75 on Sportaza

Eintracht Frankfurt 3-1 Schalke at 11.0 on Sportaza

Another team to pick up form after making a sluggish start, Wolfsburg lies in 7th spot for now after heading into winter-break following a 1-2 victory at Hoffenheim.

Freiburg has seemingly recovered from a minor slump and it notched a convincing 4-1 win over Union Berlin to put itself 4 points behind the league-leaders in 2nd position.

For this encounter, our Bundesliga betting tips experts would suggest taking the 2.28 offer on Over 1.5 Goals for the home-team. Wolfsburg has looked quite sharp in front of goal on home-turf having scored at least goals in 6 of its 7 league-matches at the Volkswagen Arena. Moreover, Freiburg has struggled defensively away from home having conceded 2 or more goals in 4 of its last 6 league-matches on the road.

The 2.05 line on Over 1.5 Total Goals in the 2nd Half presents a nice option as well. Wolfsburg has managed to score 7 times during the 2nd half in its 7 home-games thus far. In addition, Freiburg has allowed 8 goals in the latter period of its 8 away-fixtures but it has also scored 10 times at the other end during this period.

Match Result: Draw at 3.40 on Sportaza

2nd Half Correct Score: Wolfsburg 1-1 Freiburg at 6.20 on Sportaza

Since its dreadful start to the campaign, Bochum has made a valiant resurgence and the 0-1 victory at Augsburg on Matchday 15 puts it just a point behind safety in 17th spot.

In the meantime, Hertha Berlin lifted itself off the drop-zone on goal-difference to 15th position courtesy of a 2-0 win over Köln right before the midseason-interval.

Favouring the home-team to secure the Match Result at odds of 2.62 seems to be the best option according to our Bundesliga betting tips experts. Bochum has stayed unbeaten through its previous 4 league-matches at home which include a 3-game winning-streak. On the other hand, Hertha Berlin has suffered 5 defeats in its 7 away-matches thus far including each of the last 3 fixtures on the road.

The 2.00 line on Over 2.5 & Yes in the Total Goals & Both teams to Score market will also make a decent betting pick for this clash. Bochum is averaging more than 1.5 goals per game at home but has only managed 1 clean-sheet till now. Besides, Hertha Berlin has only failed to score in 1 away-match this season.

Match Result & Both Teams to Score: Bochum & Yes at 4.75 on Sportaza

Stuttgart has shown some improvement after a very slow start to the season but the 2-0 defeat at Bayer Leverkusen has dropped it back into the drop-zone in 16th position.

In contrast, Mainz has dropped off a cliff after making a strong start and the 1-1 draw at home against Eintracht Frankfurt on Matchday 15 has pushed it down to 10th spot.

Picking the home-side at a 2.40 price to grab the Match Result looks the most valuable option in this fixture for our Bundesliga betting tips experts. Home-form will be critical in its survival-bid and it has definitely taken strides in this regard after racking up 3 straight league-wins at the Mercedes-Benz Arena. Moreover, Mainz has tasted 4 defeats in its previous 5 Bundesliga matches on the road.

Opting for the 2.00 line on Over 2.5 & Yes in the Total Goals & Both Teams to Score market should be a pretty good choice as well. Stuttgart has scored 8 times in its last 3 home-games but it still has not got a clean-sheet at home this season. At the same time, Mainz has failed to score in just 1 away-match in the Bundesliga till now.

Stuttgart to Score in Both Halves: Yes at 3.33 on Sportaza

Köln may have relished the winter-break as it has allowed the team to reorganise itself after the 2-0 loss at Hertha Berlin on Matchday 15 dropped the club down to 13th spot.

Werder Bremen lost 1-2 at home to Leipzig right before the interval but it has shown reasonably consistent form to occupy 9th position in the league-table.

The 2.20 offer on Over 1.5 goals for the away-team looks to be the finest choice in this clash according to our Bundesliga betting tips experts. At present, Köln has the 3rd weakest defence in the division with only 1 clean-sheet till now and it has also conceded 8 goals in the last 4 home-games. Meanwhile, Werder Bremen has gone on to score at least 2 goals in 4 of its 7 away-matches this season.

Also, the 2.20 line on the away-team in the Draw No Bet market presents a pretty safe bet. Köln will be lacking some confidence since it was on a terrible run before the midseason-break with 5 defeats in its last 7 matches. Bremen has collected 11 points from its 7 away-fixtures despite losing the last couple of games.

Match Result & Both Teams to Score: Werder Bremen at 4.75 on Sportaza

Borussia Dortmund has not had any real consistency so far and it lost 4-2 at Borussia M’gladbach on Matchday 15 which has dropped it out from the top-6 into 7th position.

Augsburg is currently hanging just a point above the relegation-zone in 14th spot after losing 0-1 at home to Bochum in its last match before the midseason-break.

To our Bundesliga betting tips experts, the 2.54 offering on the home-team in the Win to Nil market seems to present the best value for this encounter. Despite its erratic form, Dortmund has won all its 5 home-games against teams in the bottom-half of the table without letting in a goal. Therefore Augsburg could be in for a very difficult contest despite failing to score in just 1 away-match till now.

Opting for the 2.32 price on 2-3 in the Goal Range market also seems a safe choice in this fixture. Borussia Dortmund is averaging just about 2 goals per game at home this season while it has conceded just 5 times in 7 home-games. So Augsburg should not score more than 1 goal even though it averages almost 2 goals per game on the road.

Borussia Dortmund 2-0 Augsburg at 8.40 on Sportaza

Despite struggling for consistency, M’gladbach notched some big victories like the 4-2 win over Borussia Dortmund on Matchday 15 which helped it up to 8th spot in the Bundesliga table.

Bayer Leverkusen was enjoying its best form before the winter-break after picking up a 2-0 win over Stuttgart that lifted it up to 12th position for the first time this season.

In the view of our Bundesliga betting tips experts, backing the home-team at odds of 2.66 to bag the Match Result is the standout pick for this clash. M’gladbach has relied heavily on its home-form this season having produced 6 wins from 8 matches thus far. Bayer Leverkusen has faced plenty of problems on the road and has lost 3 of its previous 4 league-matches on the road.

1st Half Result: M’gladbach at 3.14 on Sportaza